We do agree that this release should mark the end of the 1.x series. Going forward, we’ll switch to Qt 5 and use the chance to boot the all-new 2.0. For such a closing release, it just makes sense to pick something related to the first code name ever given (exercise for the reader), hence why 1.9 is called "Sakura". 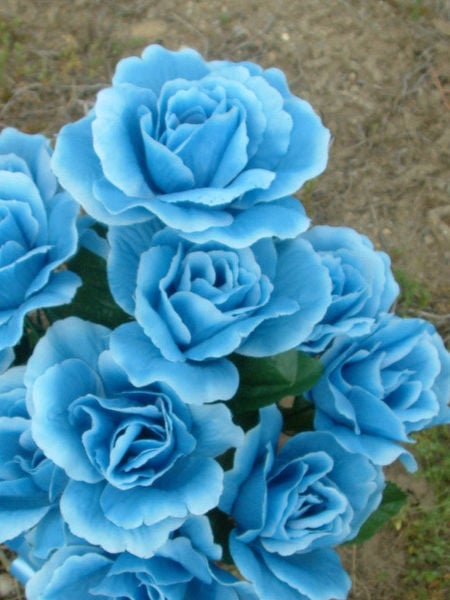 The Blue Winter Rose is a flower that grows in the glass gardens of Winterfell. It’s pale blue the color of frost. Also, it’s connected to the legend of Bael the Bard.

Bael the Bard climbed the Wall. Took the Kingsroad and entered Winterfell. He made himself known as Sygerrik of Skagos, a singer. He sang until midnight for the Lord’s pleasure. Impressed by his skills, Lord Brandon Stark asked him what rewarded he wanted. Bael asked for the most beautiful flower in Winterfell’s gardens. Blue winter roses were just blooming. Brandon Stark agreed to offer him one.

The following morning, the virgin daughter of the lord had disappeared. In her bed was a Blue Winter Rose.

Source: A wiki of Ice and Fire. "Blazing Star" is a mesmerizing and beautiful flower, it is often used as a symbol representing happiness and satisfaction. Tending these flowers requires some patience, the reward is however worth all the hassle.

Its beautiful appearance makes it popular among gardeners, don’t be surprised if you are stunned by the florets for hours and hours. Blazing star is also known to have mild medicinal characteristics. A fabulous combination of outer beauty and inner beauty I would say.

These days, with almost every web-related test framework gets connected to PhantomJS in one way or another, presenting these attractive yet romantic blossoms marking a joyful relationship could not be a better honor for us.

…for this summer release, I pick the code name "Lavender". This summer flower is not only beautiful, it is also known for its wonderful scent and soothing quality, often served as a remedy for anything from sore joints to insomnia. Well, with the widespread use of PhantomJS in various testing frameworks since some releases ago, isn’t that exactly what this headless WebKit also brings to many web developers? Helping people to stay calm, avoid anxiety, and increase their productivity is surely a decent goal to have!

Photo by Fir0002/Flagstaffotos (Own work) CC-BY-NC via Wikimedia Commons.

…for this spring release, I cast the code name "Ghost Flower". This spring flower is rather beautiful actually. California, where I now reside, is one of its native home. In addition, I’m sure you’ll notice the significance of the first word in the name :)

Photo by Stan Shebs (Own work) CC-BY-SA-3.0 via Wikimedia Commons.

Approaching the final month before its very first birthday, I’m sure we’re all very happy to see that PhantomJS gains a lot of tractions these days. There are reports of people using it with various JavaScript test frameworks, along with assorted types of continuous integration systems. The ecosystem grows and lately there seems to be an increasing amount of projects using PhantomJS as a basis to do something which was not possible before. In short, it spreads like wild fire. Thus, it just makes sense for me to cast the winter release of PhantomJS, i.e. version 1.4, as "Glory of the Snow". It’s a winter flower with beautiful colorful star petals which easily grows and spreads to almost everywhere.

Photo by Hedwig Storch (Own work) CC-BY-SA-3.0 via Wikimedia Commons.

When I started PhantomJS, I never thought it would be this fascinating. Getting some interests from the integration testing folks is awesome. In particular, I hope (we’re getting there) PhantomJS can be a nice solution for, among others, Ruby developers. Related to this, hereby I designate the autumn release of PhantomJS, i.e. version 1.3, as "Water Lily", an autumn flower considered by many to be the "jewels of the pond".

Photo by Kazuyanagae (Own work), CC-BY-SA-3.0 via Wikimedia Commons. I feel honored that PhantomJS gains a lot of tractions and used by many front-end developers. One particular striking example is Twitter. Now, if I allow to pick a random bird (remember the tweet connection), that’ll be sunbird. In particular because Strelitzia nicolai is pollinated by the sunbirds. Strelitzia nicolai is just one species under the genus Strelitzia, commonly known as the beautiful Birds of Paradise flowers.

I would like to have "seasonal" PhantomJS release schedules. Thus, this month seems to qualify very well for a Spring release of PhantomJS 1.1. Most likely code name for this release is "Cherry Blossom" since there are apparently lots of PhantomJS fans in Japan (search for PhantomJS in Twitter) and with the recent difficult time they have, paying homage to them is the least we can do."